Compiègne’s history is closely linked to its forest rich in games. The city was truly born in the IX century under the will of Charles the Bald. The love of hunting made almost every sovereign to stay in Compiègne (François the First, Louis XV, Napoléon etc.). The second empire marks the golden age of the city. The emperor Napoléon III and the Empress Eugénie receive the well-known Series (group of people invited in Napoleon residences), build the Imperial Theater and subsidize the restoration of the City Hall. 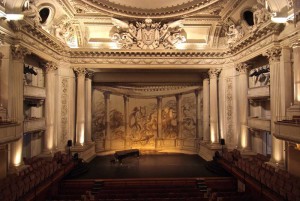 The Picantins, symbols of the city.

How to make the difference between the Compiégnois and the tourists in front of the City Hall ? The inhabitants end up by not hearing every 15 minuts the bells from the belfry anymore and the toursits raise their head to know where the sound comes from. 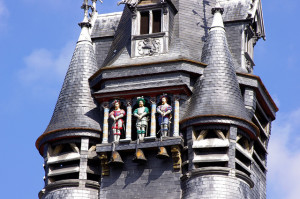 The Picantins are 3 characters around 1,50 meters which knock on belfry’s bells with their mallets. They were installed in 1530 and they represent the English, the Fleming and the Burgundian, worst France’s ennemies during the  Hundred Year’s War. They were condamned by the Compiégnois to « knock » the time with their mallets.

With 5 millions of trips per year, the Compiègne’s network is the most frequented of France (for a less than 100 000 inhabitants urban-area). The main reason of that is because buses are free since 1975, a premiere in Europe.

The forest of Compiègne covers 14500 hectares and counts 1200 km of roads. It will get soon the label « forêt d’exception » and covers 2/3 of the urban area. It starts really close to the city center which permits the Compiegnois to take advantage of the forest all over the year (hike, hack, cycle etc).

The « Palais Imperial », link between the city and the forest.

There are two advantages for the visitors :

The first royal residence was built in 1374 for Charles V and a long procession of successors both visited it and modified it. After the revolution, Napoleon Ier made it habitable again. 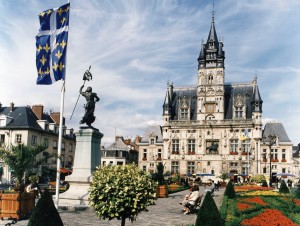 The belfy was raised from 1498 to 1530 and restored at the end of the XIXth century. The equestrian statue which represents Louis XII decorates its frontage.

At the top of the belfry, which contains the « Bancloque », one of the oldest local bell of France, the 3 Picantins (Langlois, Lansquenet and Flandrin) mark the hours with their mallets.

Please do not hesitate to contact  Compiègne Tourist office , that we thanks for all the support and the material provided, for any further information.